Transvaginal ultrasound pregnancy test is used to look at a woman’s reproductive organs. It may include ovaries, uterus, and cervix. The term ‘transvaginal’ refers to as ‘across or through the vagina. For the procedure, you will have to lie down on a table with the knees bent. The feet will be held in stirrups. The doctor will give you a transducer to place into the vagina. It will be covered with a condom and a gel. The probe sends out sound waves and it helps to reflect off body structures. The computer which receives the waves creates a picture using them. The doctor or the technician will be able to see the picture produced by the waves on the monitor. After that, the probe will be removed by the doctor. 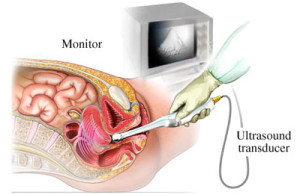 For the test, you will have to undress from the waist down. The test is done only with your bladder empty or partly filled. The test will not give you any pain or other kinds of discomfort. In rare cases, it might cause mild discomforts from the pressure of the transducer/probe. The test is usually used for cases such as:

There are no side-effects/negative effects due to transvaginal ultrasound. There will not be any radiation exposure with this test.

Infertility Treatments from our Doctors and Hospital