The word Asthma comes from the Greek verb aazein, meaning to pant, to exhale with the open mouth, sharp breath. In The Iliad, a Greek epic poem (attributed to Homer) describing the siege of Troy, the expression asthma appeared for the first time.Asthma was seen as a psychosomatic ailmentat the start of the 20th century, a tactic that possiblyfaded any medical advances at the time. Asthma was recognized as one of the sacred seven psychosomatic diseases during the 1930s to 1950s.Until the 1960s, when anti-inflammatory medications started being used, Asthma as an inflammatory disease was not really accepted.

Asthma is a disease which affects the airways that transmit air to and from the lungs. Asthmatic are the people who suffer from this chronic condition said to be.The inside walls of an asthmatic’s airways are swollen or inflamed. Due to this swelling or inflammation the airways are exceedingly subtle to irritations which make and increase your susceptibility to an allergic reaction.Less air can pass through them, both to and from the lungs as inflammation causes narrow airways.Narrowingsymptoms include wheezing, chest tightness, breathing problems, and coughing. Asthmatics usually experience these symptoms most recurrently during the night and the early morning. 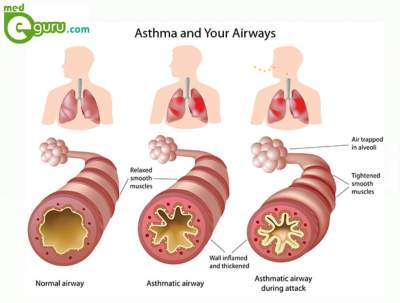 In other words, Asthma is a disorder of the lungs that causes the airways to:

The symptoms of asthma include:

Anyone can get asthma at any age. Amongst those at higher risk for asthma are people who have:

Asthma like many other diseaseresults, in part from an affinity, present in one’s genes, towards developing the disease and in part from exposures that one comes upon in the world around him/her: i.e., Part heredity, part environment.

Precisely what in our environment enhances to develop asthma in those with a genetic tendency is unknown. It may involve breathed particles to which we are allergic, cigarette smoke or air pollution, viruses or other germs, or some mix of these and possibly other factors.